What is a Regular Expression (Regex)?

Basically, a regular expression is a pattern describing a certain amount of text. For example, you know that emails are always like:

The process of describing the pattern of an email is the same process you will follow when you want to create a regular expression. The only difference will be the syntax.

All major programming languages use regular expressions (C++, PHP, .NET, Java, JavaScript, Python, Ruby, and many others). As a web developer, you have to always be working with strings to validate the user’s inputted data, to validate URL formats, to replace words in paragraphs, etc. These are the main uses for regular expressions:

Never start creating a Regex without having a live testing tool – it can get very complicated very easily. The best way is to use the "divide and conquer" strategy (again) – split your Regex into several smaller Regex’s, and then combine them all.

This is a regular expression that checks for an email pattern:

So…let’s start with the basic regular expressions using the most basic operators:

A simple character is…

Any character or symbol available. If you say ab.ve you are saying anything that starts with ab and ends with ve

A group of possible characters. Sometimes, we would like to be a bit more specific…this is where ranges come in useful. We specify a range of characters by enclosing them within square brackets ( [ ] ).

You can also use the [ ] to range numbers or letters with a dash in between. The dash represents a range of numbers or characters. For example:

You can also combine ranges of characters like this:

The ^ (caret) Character: Negation or Beginning of a Term

If we place ^ at the beginning of a [range]:

We are negating the range. For example:

If we place ^ at the beginning of a regular expression:

If you prefer, you can use these shortcuts in your regular expressions:

Grouping or Enclosing Regular Expressions with ()

We always talk about "divide and conquer," right? Well, your best friend for that will be the parenthesis operator ( ). We are now able to group any pattern just like we do in math.

For example, this Regex accepts one or many repetitions of the ab string followed by a c letter at the end: (ab)*c

Sometimes, you don’t want to specify the number of characters that a Regex can have. For example, a domain name can have between 1 to maybe 100 characters…who knows?

Quantifier allow us to increase the number of times a character may occur in our regular expression. Here is the basic set of multipliers:

We can place the quantifier after the character patterns that we want to repeat. Here are some cases and examples:

Lets face it: regular expressions are something you will use every once in a while (unless you specialize in a very particular area of the web development world). The syntax is easy to forget, and you probably are going to find your Regex’s from the internet a lot of the time. The important thing here is that you understand them and that you are able to play with them whenever you need to.

Here are some pre-made Regex’s:

Regular Expression for: Validating an Email 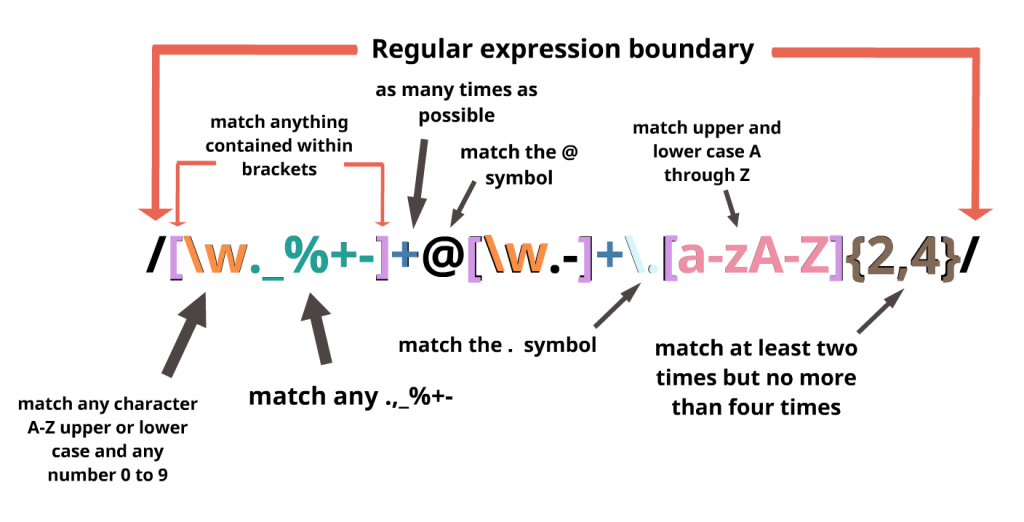 We begin by telling the parser to find the beginning of the string (^).

Inside the first group, we match one or more lowercase letters, numbers, underscores, dots, or hyphens.

We have escaped the dot because a non-escaped dot means any character.

Directly after that, there must be an at @ sign.

Next is the domain name, which must be: one or more lowercase letters, numbers, underscores, dots, or hyphens. Then another (escaped) dot, with the extension being two to six letters or dots. I have 2 to 6 because of the country specific TLD’s (.ny.us or .co.uk).

Regular Expression for: Matching a URL

This Regex is almost like taking the ending part of the above Regex, slapping it between "http://" and some file structure at the end. It sounds a lot simpler than it really is. To start off, we must search for the beginning of the line with the caret.

The first capturing group is all optional. It allows the URL to begin with "http://", "https://", or neither of them. We have a question mark after the s to allow URL’s that have http or https. In order to make this entire group optional, we just added a question mark to the end of it.

Next is the domain name: one or more numbers, letters, dots, or hyphens followed by another dot then two to six letters or dots. The following section is the optional files and directories. Inside the group, we want to match any number of forward slashes, letters, numbers, underscores, spaces, dots, or hyphens. Then we shall say that this group can be matched as many times as we want. This allows multiple directories to be matched along with a file at the end. We have used the star instead of the question mark because the star says zero or more, not zero or one. If a question mark was to be used there, only one file/directory would be able to be matched.

Next, a trailing slash is matched, but it is optional.

Finally, we end with the end of the line.