At this point, as a developer, you have probably come to realize how important third-party libraries are to help yourself through coding. 99.99% of everything you are about to code has been built already. There is a tool for everything, and, as developers, our job is to pick them wisely and integrate them in a coherent way to solve a particular problem.

Django is THE TOOL for web development. It is not just a library – it is dozens of libraries grouped together. It is a series of "best practices" and efficient ways of working. These are some of the most amazing features:

Just like any other framework, Django proposes a specific architecture to build your software and we have to learn, adopt and master all of it if we want to become Senior Full-Stack Developers (using Django):

The first important concept to learn is Website vs App. A great example can be BreatheCo.de

BreatheCode is a big django website with several applications inside:

All of those apps can be a part of a big website called "BreatheCode Platform".

to start a new project all you have to do is:

That will create a new folder in your current directory with the name of the project and a series of files.

Don’t be afraid of the generated files!

Remember everything is just text! You can and should play with the generated files to understand them properly. Who cares if you break it? The worst that could happen is that you have to run the createproject command again 🙂

After running the command, a project folder will be created with at least 4 files inside: 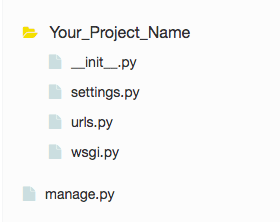 The manage.py file outside is a CLI tool to be able to control and use Django from the command line – you will be using this on a daily basis.

Now that we have a big project (website) it is time to start adding applications to it. To create your first Django application, type the following command:

☝️ To run this command, you have to be standing in the same folder as the manage.py file. You can use the CD command to move to that same folder.

Again, don’t be afraid of the generated files!

You will see a new folder with your application name and a bunch of new files inside. Let’s review them: 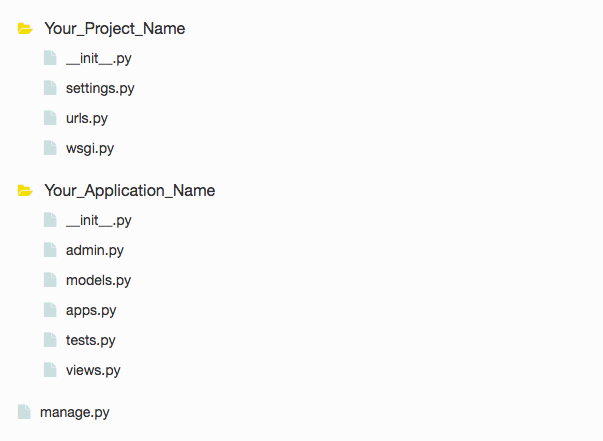 Lets discuss all of these in more detail below.

To summarize, and continuing with our "BreatheCode Project" example, this is how your project file structure may look after you have several apps inside one big project.

The Manage.py file is an amazing command line tool that will help you a lot. It is not only useful to create new applications inside your project, but all for all of these other tasks (and more):

We are going to be building a REST Based API, but don’t be afraid of the name – the REST standard basically was built as an extremely simple API.

☝️ 📺 You can read more about REST APIs on this BreatheCode Lesson.

Here is how Django handles any API HTTP Request:

The urls.py file contains an array PATHs. Each path starts with a URL pattern followed by the VIEW that is supposed to manage that path and 2 optional parameters: NAME: To identify the path; and KWARGS : a list of values that can be passed to the VIEW.

"Views" are called "views" because their main responsibility is to generate the response that is going to be sent to whoever requested it. For example: Returning a JSON or returning an HTML document.

But views have another responsibility: Views need to take care of any needed logic before sending the response back. For example, if the incoming request was a POST request to update a user, then the view needs to first interact with the Database and update the user FIRST; then it can go ahead and return the updated user as a JSON object.

The example on the left is a view that will take care of two possible requests: The GET and the POST for the /game URL. For the GET, the GamesView will get all the Game objects from the database and return a JSON with the list of them; for the POST the GamesView does not have any logic yet, but it should look for the particular Game with that given game_id and update it.

Models.py is that place where you define all the objects that will be saved into the database and all the logic needed to interact with them. You also need to specify the data-type for each of the properties each object has.

The example we have been using only needs the Game Class as Model, and the Game class has only 3 properties.

The urls.py file contains an array PATHs. Each path starts with a URL pattern, followed by the VIEW that is supposed to manage that path and 2 optional parameters: NAME: To identify the path; and KWARGS : a list of values that can be passed to the VIEW.

📺 Here is a 5 video series that explains django APIs in an amazing way: https://www.youtube.com/watch?v=Yw7gETuRKjw&index=37&list=PL6gx4Cwl9DGBlmzzFcLgDhKTTfNLfX1IK