EnglishSpanish
← Back to How to's

It’s time to update our numbers.  Every 6 months we take the task to update the current trends and data related to Developer’s wages.  The question we want to answer with updated data remains the same: What is the average wage for a Software or Web Developer in the US?

Check it out and stop wondering if it’s worth to dedicate the next 4 months of your life to learn to code, because, yeah, it totally is.

Getting into the details

The annual average salary in the US has grown up by 1% in February 2018.  Yes, 1% nationwide across all the industries and professions.  Now, web developers’ average salary has actually grown, even more, up to 3.2%, which means a median salary of $65,013 according to Glassdoor Local Pay Reports and they place an average salary for a Junior Web Developer at $60,316 in the United States.

Whereas PayScale estimates a median salary of $58,005 per year for a Junior Web Developer,  Indeed places it at $60,597 per year, and the most recent StackOverflow survey places the median salary for a Full-Stack Web Developer in the U.S. at $100,000 per year.

If we compare this data to our last report (October 2017) Bootcamp Graduates Salary in 2017, you will find the following results: 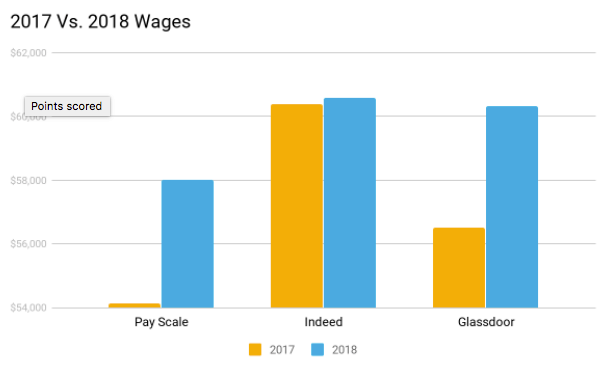 In the above chart comparison, you can easily observe a clear reflection of the wage reality from October 2017 to March 2018 and how it remains increasing through time.

Something that is also reflected in the following comparison data provided by Stack Overflow  (2015 - 2018) :

Something is clear: Salaries are increasing.  And we are not looking to promote the very result of it, we are just highlighting what others are saying.  We can affirm that the average salary - in the US - is around $59K per year for a Junior Developer position (0 to 1 year of experience).  So, is becoming a Software or Web Developer a well-paid job?  Definitely YES, it is.

On the other hand, Course Report placed a salary comparison for graduates coding Bootcamps by measuring their background/ education before taking Bootcamp studies.

They have found that there are significant differences in average salary expectations between someone who is a complete beginner, and people who have more experience in coding.  We took the data and positioned in the following table for you:

The above table only proves that post-graduation salaries certainly has a correlation with factors like background and education - plus certain soft skills that are desirable by job seekers.

When we talk about salary expectations, we don’t only care about providing you a general perspective about it, but also showing you some findings of what skills or technologies can establish slight differences in your wage.

A recent HackerRank report found that JavaScript, Java, Python, C++, C, C# and PHP are the top languages (with slight variations by industry), and Angular JS, Node.js React, Spring,  Django and .NETCore are the top frameworks that employers want candidates to have. 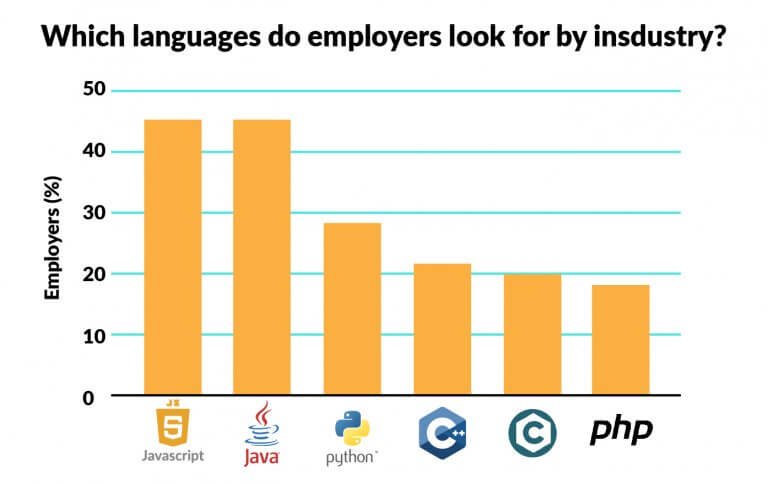 Taking this into consideration, we have created the following graphic to make a close up of salary vs. the most popular technology specialties: 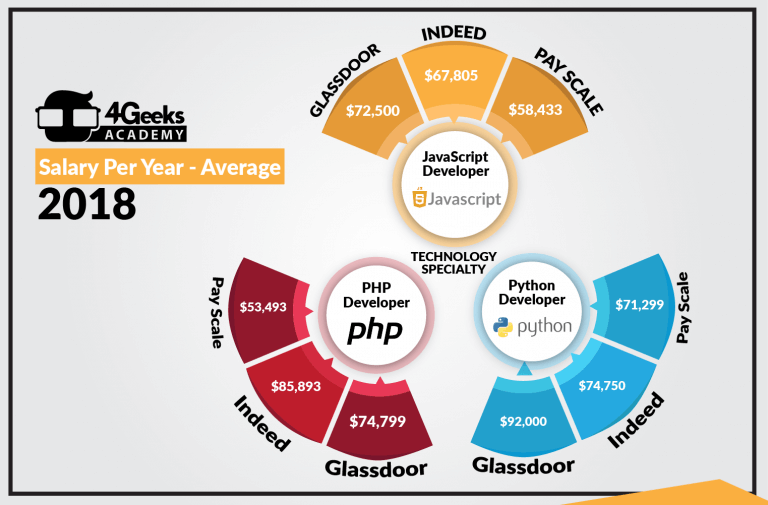 According to the graph, Web Developers with the highest salary are those with JavaScript (58K – 72K), followed by Python (71K – 92K), as a specialty in their stack of technologies.

But, even if you’re satisfied with your current position, chances are you can make your workload easier by utilizing your coding knowledge to automate certain aspects of your job.  Jobs requiring coding skills pay $22,000 per year more than jobs that don’t.

What about gender and racial Gaps?

Labor market differences among the race and ethnicity groups are associated with many factors, not all of which are measurable but the salary factor does.

Much is being done to try to close the gap.  If you are a woman trying to get the tech education you want, look at our partnership with Bridges Unite.  Together we are bringing coding education opportunities to women in Florida by supporting/sponsoring one candidate to take one of our Full Stack Development programs at no cost.  Much more is needed, and we are aware.  Feel free to contact us if you have a great idea on how to improve that.

We have said it: the biggest career challenges for women in tech is not about finding a good job or solving coding bugs, but by finding a healthy and fair work environment so that they can feel part of a team and be valued by male coworkers.

But what about the racial gap?  A latest study of the Institute for Women Policy reflects that women of all major racial and ethnic groups earn less than men of the same group, and also earn less than white men: 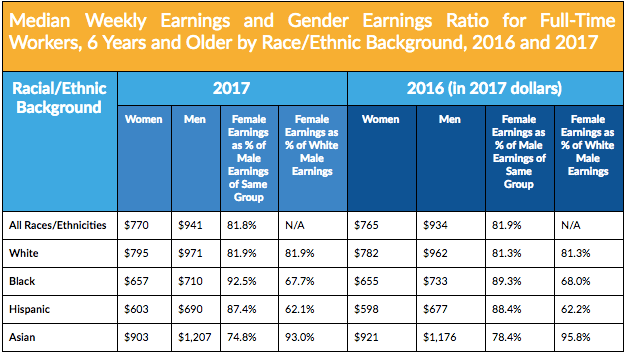 Source: Institute for Women Policy Research  Note: Hispanic workers may be of any race; White, Black, and Asian workers include Hispanics. The annual average of median weekly earnings.

The numbers demonstrate that gender and racial gaps are still far from being close.  The next step?  Compensation: start as individuals and spread equality in all labor fields supporting access and providing opportunities to help you and others get into the tech field.

In Getting Hired, what do tech recruiters want?

You need to get the skills required by most companies.  We take care of the Hard Skills: your education as a software developer; but your soft skills are equally important.

What should you do from the beginning?  Tailor your resume with your collection of work experience and keep an active presence on GitHub and LinkedIn.  Companies would rather hire candidates with a good mixture of both strong and soft skills; your duty is to tackle other projects, languages, roles and disciplines - both at work and in side projects - to make yourself versatile and expand your skill set.  That is also why we have created “Coding Saturdays”, where you are welcome to code with us, get mentorship and address your issues.

By enrolling in our program you will work in a 99% practical environment, Part-Time focused, with REAL “Senior” mentors and with a stack of top notch technologies.

Join us_ and become a Software Developer._