EnglishSpanish
← Back to How to's
Edit on Github

If you look at the Full-Stack Web Development Bootcamp industry, you rapidly realize that they have been teaching the same programming languages since the beginning.  When potential students ask about that, the academies quickly start undermining the role of the language by saying that it does not really matter - that you can switch fast from one to the other.

As a coding Bootcamp co-founder and head of the Academic and Technologies Department, this was also one of my first questions; I was creating our syllabus, but, as an experienced developer, that answer didn’t convince me.  Knowing how much technology evolves every 6 months, it’s IMPOSSIBLE that, after years of training, most of them haven’t significantly changed their syllabus.

I became obsessed: reading everywhere, asking colleagues and CTO’s that I knew had demonstrated great vision when picking their company’s stack of technologies, and I quickly started experimenting with different technologies to be taught and included in our syllabus. 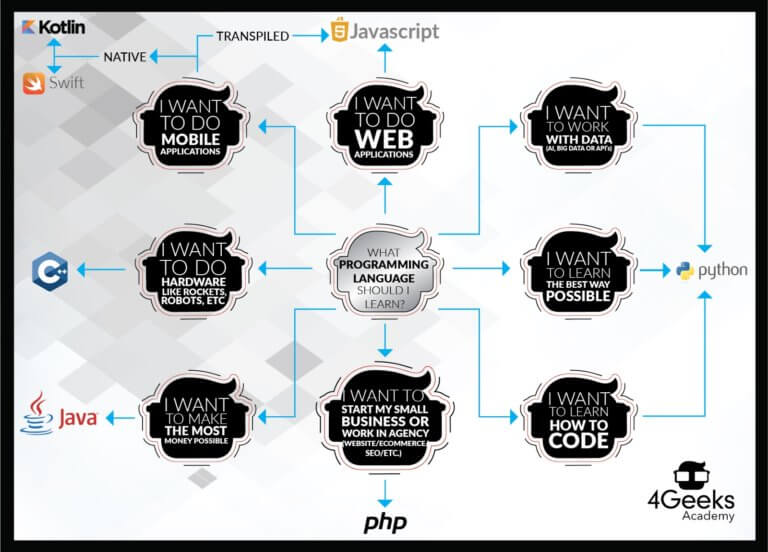 Why Do Coding Bootcamps say that the language is not “that important”?

They teach you how to make web applications, and that most of the languages have similar features for that particular matter, and that it’s not that hard to change from one syntax to the other.  The stack of technologies included in a Syllabus actually matters.  It does, sorry.  We all know that.

But I believe that the reason that they are relentless to change is because - as a company - they’re already in the “growing phase”, and developing a new syllabus is basically creating a new product:

The truth is that, in the last 12 years, the web has evolved into a lot more than just web applications.  Now, coding languages have bigger purposes and they are seeking to enter into new paths (AI, VR, Machine learning, etc.).  Being aware of that, we decided to implement this syllabus.

For example, let's talk about functionality:

Most languages have an amazing web development framework (Django, Laravel, rails, etc.), but:

Now, let's talk about some tools:

Note: None of these tools that I have mentioned have anything to do with each other, and they require a high level of specialty to master.  It’s not about the syntax but more about the architecture and the way those tools make you write code.

I can keep going all day, but I hope you get the idea.  I agree that syntax doesn’t matter, but the language does: you need to pick one, think about the tools and functionalities they provide in the long term, and, the industries and companies that gravitate around them.

We encourage our team to rethink our syllabus every month, adding or removing whatever is needed to have the best product possible. We think having an up-to-date syllabus will increase our student's success and put us ahead of the competition at the same time. We invite you to read everything about our syllabus in this pdf.